U.S. Military honored with “Wreaths Across the Grove”

Wreaths Across the Grove 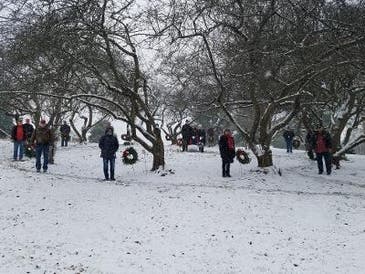 The Medal of Honor Grove is located on the campus of Freedoms Foundation in Valley Forge, PA and is the nation’s OLDEST LIVING MEMORIAL to the recipients of our nation’s highest military honor: the Medal of Honor. The Friends have been its stewards since 2011 and have sponsored this event since 2014.

You can help us by purchasing a wreath for a specific state or memorial, making a donation in any amount “in honor of” or “in memory of” a loved one or becoming a program sponsor. Your name and either the state or person for whom your donation was made or your sponsorship level will be included in a program booklet that day. At 11am on December 12th, we invite you to join us to place the wreaths at each obelisk.

Immediately following placement of your wreath (s) head over to the patio across from the entrance.

Refreshments will be GRAB & GO.
Grab a program, cup of hot chocolate or hot cider and a bag of cookies to go.

Thank you for supporting the Friends of the Grove and for being stewards with us of this wonderful place.Please consider purchasing a wreath this Christmas season for a specific state or memorial, making a donation in honor of or in memory of your loved one or being a program sponsor and then join us on December 12th! This is a rain, snow or shine event; due to COVID-19 restrictions, please wear a mask and practice social distancing while in the Medal of Honor Grove.

The sounds of birds, insects and even my footsteps hush as I approach the entrance to the Medal of Honor Grove. There are bricks with etched writing in the center of the path, and I step to the side to avoid walking on the names. It feels wrong in this place, as though I would step on the hearts of those honored here.

As I pass through the stone arch, I see green and leaves everywhere, the many trees reaching up to the sky like praying hands. The light is filtered by clouds, but there is an orange shiny lining to the cloud edge, seen through the leafy curtain right at the horizon.

The path forks. Decision looms. I am unfamiliar with the Grove, and often directionally challenged, so I decide to take every left turn, which should lead me around the outside path and back to the beginning. I am right, and soon I stand where I began. However, my soul travels much farther than the two-mile loop I walk here on the campus of Freedoms Foundation at Valley Forge, Pa.

There are more than 3,500 recipients of the Medal of Honor, which was first awarded during the Civil War. The 42-acre Grove honors each, by state, their names on plaques or engraved on seven-foot obelisks. Metal ground plaques tell more about each soldier, sailor, Marine, airman or Coast Guardsman. These names are important. They are people who saved lives and, often, sacrificed their own to do so.

A new name will soon join this distinguished honor roll, Army Staff Sgt. David Bellavia. He will receive the Medal of Honor from President Donald Trump on June 25 for his actions during the Battle of Fallujah in November 2004. Like all recipients, he gives credit first to those with whom he served. “I witnessed the best of the human condition — the loyalty, the self-sacrifice, the love that the brotherhood of arms evokes,” he wrote in his memoir House to House. “I am complete for having experienced that. Those who died gave their lives for their brothers. They gave their lives for a noble ideal: that freedom from tyranny and oppression is a basic human right.”

I stop for a moment to honor the names in the California and Texas areas, the ones closest to the entrance, and then walk on.

The setting is beautiful, as green-filtered light spills through the canopy this cloudy morning. The hush that greeted my arrival is gone. Birds sing around me, and I hear a woodpecker in the distance. Occasionally an insect buzzes past my ear, and I sway my head to drive it off.

As I walk farther into the Grove, it’s just me, the light and the trees. And the memories of those honored. This is so special, like a prayer walk.

Along the way, I will stop at different state areas, some with hundreds of recipients, others with just a few. Each area has a flagpole with that state’s flag. And the obelisks vary. Different stone, different colors, but all still here for the same reason. Honor.

I grew up around service men and women. My father and uncles and their friends, the fathers and mothers of my high school classmates, and so many more from the Army base where I spent my adolescent years. I’ve known about the Medal of Honor for as long as I can remember and felt the weight of its importance long before I made it here. But this place makes it concrete. The names. The people. The stories.

When I leave, it is with a sense of wonder and peace. Just before I exit, I pass by the Chaplains Memorial, where nine men who didn’t even carry a weapon in their specific conflict are remembered. Their concern, and that of all the men (and one woman) who have received this award, was always for their fellow man. Far from being a celebration of warfare, the Medal of Honor is a celebration of humanity.

Trasa Cobern is the lead social studies teacher at Trinity High School in the Hurst-Euless-Bedford Independent School District in the Dallas/Forth Worth area. She is attending a Medal of Honor Legacy program June 16-21 at Freedoms Foundation at Valley Forge, home of the Medal of Honor Grove.   Source

SCHUYLKILL TWP. — “To ease another’s heartache is to forget one’s own.”

Those famous words were spoken by Abraham Lincoln and on Wednesday, four individuals who best exemplified the phrase were honored with a ceremony.

The Chaplains Memorial Rededication ceremony Wednesday, held at the Freedoms Foundation at Valley Forge, honored four men who were previously not recognized at the nearby Medal of Honor Grove.

The chaplains were each awarded a Congressional Medal of Honor for their bravery during the Civil War but had not been included in nearby memorials.The Freedoms Foundation took time Wednesday to identify the heroic deeds of the men.

According to the program, John Milton Whitehead, 15th Indiana Infantry, “Went to the front during a desperate contest and unaided carried to the rear several wounded and helpless soldiers.”

Similar citations were made regarding the other three men. James Hill, First Lieutenant , 21st Iowa Infantry, is said to have “by skillful and brave management captured three of the enemy’s pickets.”

Francis Goodblood Hall, 16th New York Infantry, “voluntarily exposed himself to a heavy fire during the thickest of the fight and carried wounded men to the rear for treatment and attendance.”

Lastly, Milton Lorenzo Haney, 55th Illinois Infantry, “voluntarily carried a musket in the ranks of his regiment and rendered heroic service in retaking the Federal works which had been captured by the enemy.”

During the ceremony Wednesday, guests heard from Congressional Medal of Honor recipient James McCloughan on the importance of remembering brave men and women.

“The meat of the Medal of Honor citation reads, ‘For conspicuous gallantry and intrepidity at the risk of one’s life above and beyond the call of duty.’ That’s a short sentence that means a lot. These men that you’re going to honor today I’m sure did not carry a weapon except for one, who carried a musket,” said McCloughan. “That was not the battle that they wanted to fight. The battle they wanted to fight was the spirit of the men that they went out to serve with.”

McCloughan went on to talk talk about the lessons he personally learned from his service and tasked those in attendance to take that lesson and apply it to their lives.

McCloughan described his second day serving in Vietnam. He was called to assist a wounded man after being injured himself. When he went to assist him, he saw he was wounded in his stomach with some of his organs coming out of his abdomen. He used his own water to keep the organs from drying out and carried the man in his arms through gunfire.

“While I was there I was trying to anticipate how I was going to carry him because I couldn’t throw him over my shoulder. I finally decided him to cradle him like a baby … Back then I could get down really low and get through the crossfire and weave and we wouldn’t get hit. Out of nowhere came a thought— that I had not told my father since I was a small boy that I loved him,” said McCloughan.

McCoughan explained afterward that he made sure to tell everyone he knew how he felt about them. He then encouraged those in attendance to tell their family and friends often that they loved them. He concluded by telling guests that his experience on the battlefield was his biggest lesson.

“If I’ve learned anything through my lifetime it’s that sometimes we neglect those whom we should revere the most. These men cared about those they didn’t even know. They cared about a Jim McCloughan and that Jim McCloughan maintained his spiritual health as well as anything else. If we lose that we’re dead anyway.”

McCloughan then led the crowd in a singing of “God Bless America” followed by a closing performance of “Taps” on the bugle.

Guests were then encouraged to walk outside to Medal of Honor Grove to take a look at the new sign honoring the four newly recognized chaplains.

Founded in 1949 by E.F. Hutton, Don Belding, Kenneth Wells, and General Dwight D. Eisenhower, Freedoms Foundation is located on 75 acres in the heart of Valley Forge. The group is a national educational non-profit welcoming thousands of people a year to participate in programs to encourage engaged, responsible citizenship based on the Bill of Responsibilities the group created in 1985.   Source

Ever-bustling Route 23 goes past the Freedoms Foundation and takes you right into Valley Forge National Historical Park. Intent on arriving at the monuments, trails and re-created Revolutionary War barracks, many tourists probably drive past the turnoff for an organization that promotes constitutional literacy and civic engagement in a way that appeals to a nation vastly more diverse, but just as contentious, as that of the 18th-century founders.

VALLEY FORGE, PA – April 17, 2017 – Freedoms Foundation at Valley Forge is pleased to announce, in cooperation with Schuylkill Township, Chester County, and Natural Lands Trust, a conservation easement on the Medal of Honor Grove. The Grove is the oldest living memorial dedicated to Recipients of the Medal of Honor and this easement ensures that it will be preserved for perpetuity.

The Medal of Honor was instituted by President Lincoln and first awarded to Recipients from the Civil War. It is the highest award for valor in action against an enemy force which can be bestowed upon an individual serving in the Armed Services of the United States. Thomas Kelley, President of the Congressional Medal of Honor Society stated, “In October 1964, over 100 Medal of Honor Recipients came to participate in the dedication of the Grove, bringing to bear the significance of its vision. It’s been over 50 years since that day and the Grove is just as important now as it was then, perhaps more so. I can’t be more pleased that this easement will secure its preservation and its tribute for generations to come.”