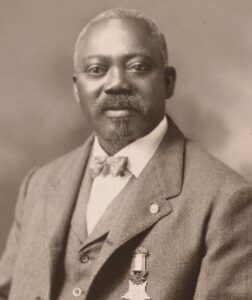 February 1st marks the beginning of #BlackHistoryMonth.    Please join the Friends of the Medal of Honor Grove in celebrating the contributions and achievements of African American Soldiers and civilians during the month of February in honor of African American/Black History Month.

“As in the past, for over 400 years, Black/African Americans continue to write our nation’s story with their commitment to arts, sports, science, technology and politics,” said Hobbs-Joseph. “They also continue to defend and serve our country, to preserve our way of life, our freedom.”

The Medal Of Honor is the highest award for valor and gallantry in action or conflict against an enemy force which can be bestowed upon an individual serving in the Armed Services of the United States of America.  There have been 93 African American service members awarded the Medal of Honor since the Civil War.  The Medal of Honor Grove is the oldest living memorial to the more than 3,500 Medal of Honor recipients in the nation and serves as a place to honor the past, in order to better understand our Future.

Here we will examine the extraordinary heroism of Medal of Honor recipient Private Henry Johnson who was a member of the 369th US Infantry Regiment – an all-black infantry unit in WW1- who spent more time in combat than any other American unit did.  The 369th US Infantry Regiment nicknamed the “Harlem Hellfighters” was founded in 1916.  In addition to Private Johnson, the Hellfighters also listed musicians and artists who were able to share their War experiences in France with a wider audience through their art.

First – some background on #BlackHistoryMonth:

Carter G. Woodson, a Harvard-trained historian, hoped to raise awareness of African American’s contributions to civilization when he and the organization he founded, the Association for the Study of Negro Life and History (ASNLH), conceived and announced Negro History Week in 1925. The event was first celebrated during a week in February 1926 that encompassed the birthdays of both Abraham Lincoln and Frederick Douglass. The response was overwhelming: Black history clubs sprang up; teachers demanded materials to instruct their pupils; and progressive whites, not simply white scholars and philanthropists, stepped forward to endorse the effort.

The celebration was expanded to a month in 1976, the nation’s bicentennial. President Gerald R. Ford urged Americans to “seize the opportunity to honor the too-often neglected accomplishments of black Americans in every area of endeavor throughout our history.” That year, fifty years after the first celebration, the association held the first African American History Month. By this time, the entire nation had come to recognize the importance of Black history in the drama of the American story.[2] “

[2] (Excerpt from an essay by Daryl Michael Scott, Howard University, for the Association for the Study of African American Life and History)  https://africanamericanhistorymonth.gov/about/ = a collaborative project of the Library of Congress and the National Endowment for the Humanities, National Gallery of Art, National Park Service, Smithsonian Institution, United States Holocaust Memorial Museum and U.S. National Archives and Records Administration.