Dec. 9, 2017. Volunteers attended this year’s Wreaths Across the Grove and posted the wreaths at all the obelisks as well as the Chaplains, AOH, Lincoln Statue, Gold Star Families, Gatehouse, POW/MIA and the Circle of Trees. Afterward everyone enjoyed lunch in the dining hall. The snowfall was a bonus. Thank you!

Marine Circle of Trees. This memorial is a circle of thirteen flowering crab apple trees, one for each marine, who died in a training exercise in Vietnam on March 28, 1967. Family and friends joined in laying a wreath at each tree in memory of these young marines. 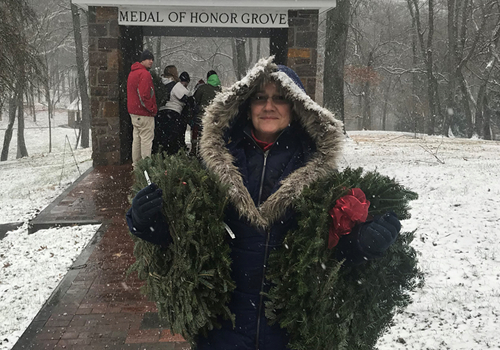 Over 180 trees were removed from the Grove. The local water company cleared the area around their easements on the 2 pipelines that run through it.

The Friends of the Grove had 60 dead or diseased trees removed.

The Friends of the Grove realized it’s goal of repaving the roadways in September. The project began in April 2012 and  was completed this year.

The Medal of Honor Grove now has new twenty foot flagpoles with flags, flying in all 52 state and territory areas. As the Friends embark on a beautification program we’d like to thank Ray Bentley for this generous donation. Ray’s resolve to honor the Grove and our recipients is testimony to his patriotism and is greatly appreciated by the Friends and our community. Thank you to John Williams from Brandywine Flags for his professionalism and care in installing all the poles and flags during November and December.

For the second consecutive year trees were planted in the Grove.  On Veterans Day, November 11, 2017, 80 new trees were planted in the Hawaii, Oregon, Washington, Idaho, Utah, Nevada, Wyoming, S. Dakota, N. Dakota, Minnesota, Illinois, Iowa, Wisconsin, Pennsylvania, N. Hampshire, Conn and N. York areas. Valley Forge Cadets, Renaissance Academy students and other volunteers planted all the trees within 3 hours. Afterward Pizza was enjoyed by all. The trees were delivered the day prior and unloaded by Mark Prowell, Gene Halus, Jerry O’Dell, Cory Etchberger, Wally Nunn and Deb Woolson. The trees were made possible by a grant from the PA Horticultural Society’s TreeVitalize Program. 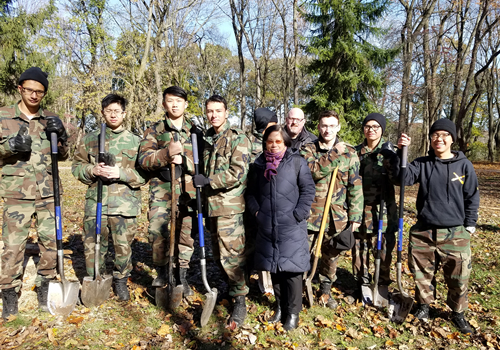 In April 2017, Freedoms Foundation at Valley Forge, along with Schuylkill Township, the Chester County Commissioners and Natural Lands Trust, announced the establishment of a conservation easement on the Medal of Honor Grove. What this means is the the Freedoms Foundation sold the development rights to the Grove, which means it can never be developed or sold in the future. Read more here

The Ancient Order of Hibernians have been stewards of this memorial since 1985 when it was dedicated. They raised the funds to establish this memorial which honors over 150 immigrants who received the Medal of Honor but could not be accredited to any state because they were not citizens.  This year they built the wall and created a garden so that these men could have ground plaques for the first time. 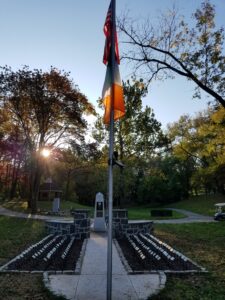 April 8, 2017. The New Jersey AOH worked on the NJ acre as well as West Virginia and Pennsylvania. Thank you for your help and we hope to see you again soon.

April 25, 2017. ​Thank you to the Wells Fargo Greater Philadelphia and Delaware Veterans Team Member Network for their excellent cleanup today. They not only washed obelisks but all the statues and memorials on the Freedoms Foundation campus.

April 26 & April 28, 2017. PECO did landscaping and painted benches in the Grove. Thank you for all you do and especially for returning on a dry day to paint.

June 3-4, 2017. Michael Larson flew in from Wisconsin to work on the acre. He did a great job weed whacking and moving ground plaques that were NOT by a tree and installing them along the sidewalk. 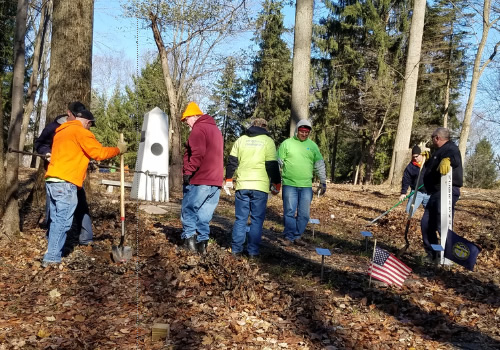 Thank you to Molly McGuire’s Pub  for their donation of $2255 to the Friends of the Grove. The Friends received half of the proceeds from their Annual Golf Outting. Read more here 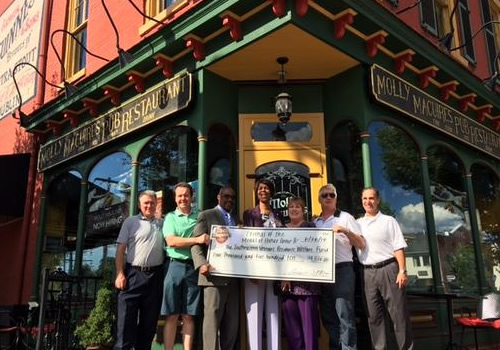 May 6 – 7, 2017. The Military Living History Association held its their annual WWII  Weekend at the Freedoms Foundation campus. 175 reenactors slept in the Grove as over 700 people attended in the cold, rainy weather.  There were tours of the Grove, battle re-enactments, exhibits, engagement with the re-enactors, Rosie the Riveter, a Frank Sinatra impersonator, a fashion show and much more. Lunch was available for purchase from Valley Forge Catering Company throughout the day.  It was a weekend of honoring and remembering our veterans in a very up close and personal way. 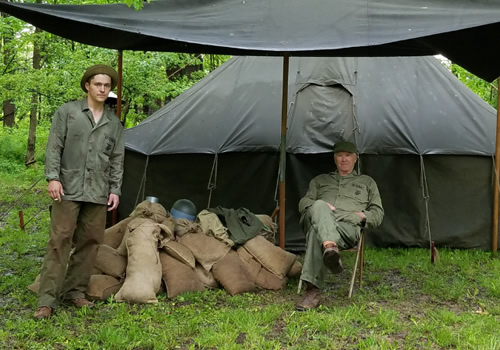